High Soil Salinity Problems
and How to Correct Them 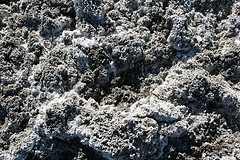 Salt is a necessary element for all life, but too much can be a problem. High soil salinity or "salt-affected soils" as they are sometimes called are problems in many parts of the world. Salt, in science, is also referred to as Sodium (Na). For example, "hydrated sodium chloride" is sea water.

In states or provinces where road salt is used every winter, the strips of grass along paved roads can become quite damaged. The salt may be reapplied many times during the winter. The snow plows do a good job of throwing the salted snow 20 ft or more off the side of the road.

However, the largest degree of damage occurs along the coast. Tropical storms push brackish water far inland, especially near rivers and swamps. Deserts or arid have problems with sodium as well. Lastly are the soils that are irrigated with sewage water or other types of nonpotable water.

Salt is also deposited naturally as a result of mineral degradation. Calcium(Ca), Magnesium (Mg), Potassium (K), Chlorine (Clᴮ), and others contribute to salt accumulations (at pH above >9.0). Inorganic fertilizers are also high in salt due to the salt content of the minerals.

The highest concentrations of salt-affected areas are in Australia, North and Central Asia and South America. However, every continent and almost every part of the earth can be affected. The photo above shows salt that has collected on the soil surface after the water has evaporated. 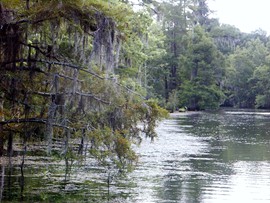 Salt is not always a bad thing, however. The picture on the left was taken on the Sabine River near the Texas/Louisiana line. It is a beautifully scenic river that feeds the brackish marshes and swamps just inland from the Gulf of Mexico. These salt marshes are home to many thousands of species of birds and animals, some of which are unique to the area.

Some marshes that have been drained for building construction will retain much of the salt.

Basic Soil Overview and the Effects of Salinity in Soil

Soil is composed of tiny particles that are bound together. These larger particles make up the "soil structure". This binding of soil particles allows water and air to filter and collect in the soil. Soils with a higher percentage of clay (loamy) will hold more water and nutrients. Sandy soil do not have the same structure or holding capacity, so water and nutrients will leach quickly.

Saline soils will have a relatively high number of sodium ions compared to healthy soils. Excessive salt not only destroys the soil structure, salt also attracts water and blocks its absorption to plant roots. As a result, plants may exhibit signs of drought even when the soil is wet or waterlogged. Other signs of salt damage may be water pooling on the surface without penetrating.

Just as the results of high soil salinity on plants is seen in leaf and stem burns, it is hard on earthworms and microorganisms as well.

The three types of high sodium soils are:

Saline Soils: This is soil that contain high total soluble salts that can adversely affect plant health. An important note is that saline soils still have good soil structure intact. Saline soils must have chlorine present (Cl) where sodic soils usually lack chlorine. Soil pH for saline soils is usually between 7 and 8.5. An older name for saline soil is "white alkali" since a white salt film is often present on dry patches of bare ground.

Sodic Soils: Sodic soil have high enough levels of sodium ions to affect soil structure. This means the sodium binds to clay particles so the clay in the soil does not stick together when the soil becomes moist. It often becomes easily waterlogged, not allowing water to drain.

When it does dry out, it becomes like concrete and is difficult for plant roots to penetrate. Because the soil does not hold together the soil easily erodes away, especially on hillsides. The plants exhibit drought stress even with what appears to be adequate moisture. The pH is sodic soils are usually between 8.5 and 10.

Sodic/Saline Soils: These soils are a mixture of both, but saline/Sodic soil usually exhibit more of the characteristic of saline soil especially reduced water uptake by plants, leaf burn, etc. On occasion it will cause structural problems in soil. Treatment of these soils are the same with all three.

How to measure soil salinity? For an accurate test of the amount of Na in soil, samples must be sent to a lab that handles soil salinity problems. The results are obtained by performing an electrical conductivity test. The more Na ions are in the solution, the better it conducts electricity.

We correct soil salinity problems by applying a product containing calcium. The least expensive and most often used product is “gypsum”. Gypsum works fairly quickly as it reacts with the sodium. It can even be applied on waterlogged soil.

Water is the carrier that takes Na to deeper soil levels. Sometimes the deeper soil a foot or more below the surface, may be collecting the sodium and may become sodic at that level. If this happens, the downward movement of water stops at the affected level and begins moving horizontally. It may take a while for the gypsum to affect the deeper soil levels.

The Calcium (Ca) in gypsum replaces the salt while the sulfate in gypsum reacts with the sodium forming sodium sulfate. Sodium sulfate is a highly water-soluble material that is easily leached below the root zone. This process also repairs soil structure so soil particles can bind with each other again. For severe cases the process may take several seasons.

The amount of gypsum applied will be determined by a soil test. Test results will often indicate applications of 1 ton to 10 tons per acre.

On average, for moderate to severe damage, gypsum can be applied as much as 50 lbs per 1000 sq. ft. Gypsum doesn't work well as a preventative before damage occurs because the elements break down.

Gypsum comes in different purities with the most being 100% pure. It is not uncommon for feed store varieties to be around 60% pure. Lower quality gypsum means more will need to be applied for the same results. It is best when performed along with core aeration so the gypsum to get below the surface.

Without a soil test, apply no less than 10 lbs per 1000 sq.ft. Less than that will not be very beneficial. However, do not apply more than 50 lbs per 1000 sq. ft at a time. Water heavily to activate and to promote leaching.

Another method for correcting salinity problems is with sulfuric acid. It melts the lime already in the soil and makes its own gypsum. Sulfuric acid requires that lime (calcium) be present, or if not, limestone can be added at the time. Most people will find that the easiest method is to use gypsum.

Note: Gypsum has people believing that since it corrects the soil salinity problem, that it works to make water penetrate through compacted soil more easily.

However, Gypsum doesn't do that very well. It works with salt soils because it breaks the connection of salt to clay and then converts the salt to sodium sulfate and allows it to flow below the root zone. It simply can't do that with compacted soil where salt is not involved.

To get water moving on hard soils, use wetting agents to move water through compacted soils again or perform core aeration to relieve the compaction.

Amending Clay Soils
Many lawns struggle with clay soils. They become rock hard in summer, are easily compacted and have poor drainage. Learn the best methods of amending and working with clay soil.

Soil Microorganisms
Soil Microorganisms are essential for all plant life. Click here to learn about the different types of soil microbes, the conditions they are most active in and the best ways to stimulate them.

Organic Top Dressing for Lawns
Organic compost top dressing is a fairly new practice for home lawns. Get helpful advice and step by step directions for the best possible results.

Understanding Soil pH and Corrective Measures
All plants have a preferred soil pH. Understanding soil pH and the different materials for making corrections is not hard if you know what to do. Everything you need to know is here.

Soil Salinity back to Lawn Fertilization
Everything you need to know to properly fertilize your lawn.