All Grass Types Are Divided
Into Two Categories

While there are only grass types, cool season and warm season grasses, there are thousand of grass species throughout the wold.

Except for a few species, most grasses will come in only two colors: green and tan. Green when growing and tan when dormant.

An Answer to a Commonly Asked Question

In early spring, especially in lawns that are not well maintained, it is common to see a mixture of green cool season grass mixed in with still dormant warm season grass. The photo below is a good example.

In case you are curious, here is why you see grasses greening up at different times:

Cool season grass remain a light shade of green through winter and will start greening up and growing in early spring. These grasses will thrive in temperatures from 65 to 75 degrees.

However, warm season grass types emerge from dormancy in late spring and thrive in temperatures from 80 to 95 degrees. It is built into the plant's genetic structure to begin growth at specific soil temperatures.

A well-planned and maintained lawn will often have a single type of grass. Whether it is a warm or cool season grass depends on the geographical location, climate zone adaptation of a specific grass variety and the personal choice of the owner. In certain situations, for example with southern bermudagrass lawns, a lawn may purposely have both types to maintain color year around. However, in most cases where both types exist, it is a sign of a lawn that was let go for many years or due to encroachment from neighboring lawns.

Therefore, where the two different grass types exist, you will see the green and tan mixture from fall until early spring.

All warm season grasses lose chlorophyll in the fall and turn from green to tan. Cool season grass types, however, will often remain a shade of green through the winter.

A View of Two Grass Types 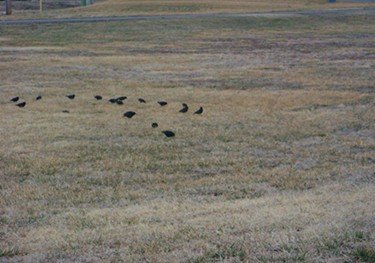 This photo was taken in mid-winter. It is a field that receives no care during the year except for mowing. As mention earlier, the photo shows a mixture of straw colored, warm season grass as well as green, cool season grass scattered throughout. The birds, like those shown, are largely responsible for depositing seeds of many different grass types and weeds. (Photo taken by Russ James)

The following is not an exhaustive list, but contains some commonly used cool season lawn grasses. More detailed descriptions and uses of these grasses can be found in the Cool Season Grass section of this site.

Warm season grasses are the choice of many in warmer climates. Many grasses within this group spread by "runners" and can easily fill in injured areas. For detailed information about each of these grasses, look in the Warm Season Grass section. Examples of common warm season grasses include:

Climate Zones of the U.S.
Unlike some plants, you can't bring your grass indoors when conditions don't favor it. Choosing the right grass for your climate zone is important.

Watering a New Lawn
Watering a new lawn is very different from watering a mature lawn. When planting a new lawn, success will be greatly increased by learning proper watering techniques.

Cool Season Grass Cultivars
Many grass types have numerous varieties to choose from. Click here to see the "cool season grass cultivars" that are available.

Warm Season Grass Cultivars
Many improvements have been made with warm season grasses in the last few years. Click here for a list of popular "warm season grass cultivars".

Cool Season Grasses
Detailed information of popular cool season grasses in the U.S. Everything you need to know including the pros and cons, maintenance tips, and insect and disease problems.

Warm Season Grasses
Detailed information on popular warm season grasses. Which one is right for you, pros and cons, and tips on how to care for each one.