Climate Zones of the U.S.

Basic knowledge of climate zones can be very useful. Grasses will always thrive best when planted in the correct zone.

In the U.S. there are four primary grass adaptation zones. There is also an additional region located in the central U.S. called the Transition Zone. These zones should not be confused with the USDA's Eleven Plant Hardiness Zones used for trees and other plants. The plant hardiness zones are described farther down this page.

The turfgrass zones in the U.S. are oddly shaped because they follow along temperature and humidity contour lines. While almost all grasses will grow in any zone for at least part of the year, all grasses are best suited for a specific climate zone. Unlike container plants, you can’t bring your grass indoors when conditions no longer favor it, so choosing a good grass for your area is important.

The climatic zones in the U.S. are labeled as Cool/Humid, Warm/Humid, Cool/Arid, Warm/Arid. The transition zone was added because of overlapping temperature and humidity conditions in the central U.S. It stretches from the extreme eastern edge of New Mexico to the central East Coast. The northern edge reaches into central Illinois and as far south as northern Louisiana. The center of the transition Zone is considered by many to be the most challenging place in the U.S. for quality turf. The following chart shows the location of the different turf climate zones.

With the changes in climate in the U.S., with longer winters and more rain in areas, you may need to be more careful with some borderline plants. Choose some that are solidly in the center of your climate zone. 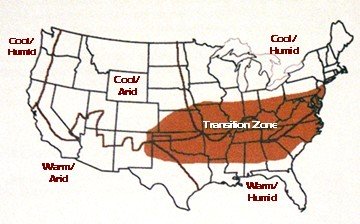 Preferred Grasses In Each Climate Zone

I observed in southern Missouri that the majority of lawns were cool season grasses. When I crossed over the border into Arkansas, there was a sharp increase in warm season grasses, especially bermudagrass. The Missouri/Arkansas line is roughly in the center of the transition zone and the central dividing line between warm and cool season grasses.

Some cool season grass cultivars were bred to be able to grow in places where warm season grasses dominate, if that is what you prefer. You will have to check to see if they can survive in your zone and what water requirements they have, especially in drier locations.

There are some exceptions, one being perennial rye. It is a cool season grass, but has poor cold tolerance and can be injured in the in cold winters. It is best used for overseeding warm season grasses or as a lawn grass in the transition zone.

One more thing that can help in choosing the right grass, is by checking out your local university extension office. They can help you with any specific questions you may have for your area. You can also look at the National Turfgrass Evaluation Program. The program tests the different grass types in different locations around the country to see how well they perform. Many of the nation's universities that have agricultural and turfgrass programs are the sites for these tests.

The climate zones for plant hardiness focuses primarily on the minimum cold temperatures starting in the north and moving south. Trees and other are assigned a climate zone based on their ability to withstand specific drop in temperature before injury. In the U.S. there are eleven zones. Keep in mind that these zones do not consider high temperatures, which can vary greatly.

Biology of Grass Seed Germination
Understanding the basic biology of grass seed germination will reinforce your knowledge of planting a lawn and help answer the “Why is it done this way?” line of questions.

Understand Soil pH and Corrective Materials
All plants have a preferred soil pH. Understanding soil pH and the different materials for making corrections is not hard if you know what to do. Everything you need to know is here.

Plant Structure and Growth Habits
In the world of turf grass, understanding plant structure and growth can provide helpful insights to maintaining a beautiful lawn.