Types of Microorganisms
in Soil, Trees and Plants 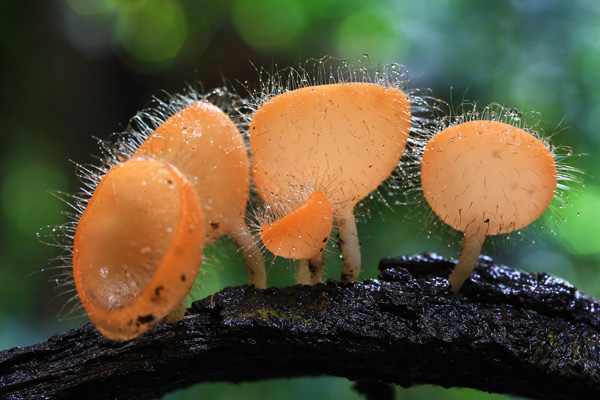 There are thousands of types of microorganisms and their role is extremely complex. Most are absolutely essential. In fact, the relationship between soil microbes and plant health are some of the most complex on the planet.

Just a teaspoon of soil can have more microbes than the total of earth's human population. There are good microbes and harmful ones. Generally, as long as the beneficial microbe population is active and healthy, they will often keep the pathogenic microbe population at bay.

Stressed grass and trees weaken the plants ability to resist pathogenic penetration and diseases can result.

There is almost no place on earth where soil microorganisms don't exist. Nature will decide the type of microorganisms that will thrive in a particular place. From super heated water of volcanic pools to the polar ice caps, each microbe thrives where it is designed to thrive and performs a specific function.

Certain types of microorganisms are important for the start and continuation of plant life. Without them, nothing would live. For example, microorgansims in soil break down raw elements and organic material into soil nutrients and healthy soil components and humic substances.

What Beneficial Microorganisms Do

Most types of microorganisms are important for life as many release enzymes, essential amino acids and proteins back into the soil to be used by plants.

There are so many different types of micrororganisms. Just a tiny amount of soil can contain billions of bacteria, fungi,  mycorrhizae, viruses, nematodes, and more. Most are a form of decomposers that recycle minerals and organic matter. They also release beneficial enzymes that stimulate root growth and increase plant health. Some forms of fungi trap and kill harmful nematodes and help keep their numbers under control.

Some uses of microorganisms include "Bacillus thuringiensis" , a soil dwelling microbe that is used as a pesticide against many insects that are in the larval stage, such as grubs, caterpillars and even mosquitoes. This type of microorganism is sold as "all natural" or organic pesticides. Be sure to read the label to make sure it contains this ingredient.

What Determines which Microbes will Live or Die?

DNA in soil shows a huge diversity of soil microbes, each performing a task that is specifically suited for them. What determines which specific type of microbial life will exist in your soil?

Here is the answer: All mineral particles have different chemical composition and surface properties which influence the survival or demise of soil life. Over time the environment itself selects precisely what will survive and thrive. Slight changes can have significant affects on microbial populations. Some that were being suppressed may experience renewed life through changes in soil properties. Again, the environment will always select. Every first year biology student will learn the importance of that saying.

Descriptions of 3 Main Types of Microorganisms

Bacteria are single celled organisms that make up the largest group of soil microbes. One teaspoon can contain as many as 1 billion bacteria. They are named largely according to the job they perform in the soil. They are divided into 4 primary groups and most are beneficial.

The decomposers: As the name sounds, they decompose everything from tree limbs, fallen leaves, dead animals, organic matter, insect bodies, and more and recycle the carbon into nutrients.

The Mutualistic Bacteria: These are the bacteria that take atmospheric Nitrogen (N) and convert it into nitrogen for plants. There are 4 types that do this. Three types live freely in the soil and the Nitrogen can be used by any plant. One type of mutualistic bacteria must have a host plant, all within the legume family, such as alfalfa, soybeans, and clover. It is a symbiotic relationship where the plant supplies the carbon in the form of sugars for the bacteria and the bacteria capures atmospheric Nitrogen and converts it to Nitrogen for the plant. The process is called "Nitrogen fixation" and is quite a complex procedure.

Pathogenic Bacteria: These bacteria produce diseases in plants. When I was a licences arborist I treated a lot of trees for fire blight. Fire blight on ornamental pears and other fruit trees, etc was a difficult and time consuming process to treat. I had to cut out the diseased limb and after each and every cut I needed to stearlize the lopper or saw. Otherwise it could be spread to other parts of the tree. Blights are caused by these pathogenic bacteria and are spread by insects.

Lithotroph Bacteria: These are similar to Mutualistic bacteria except they work on soil sulfur. Some are arobic bacteria (oxygen rich soil) and anerobic bacteria (Low oxygen soil). 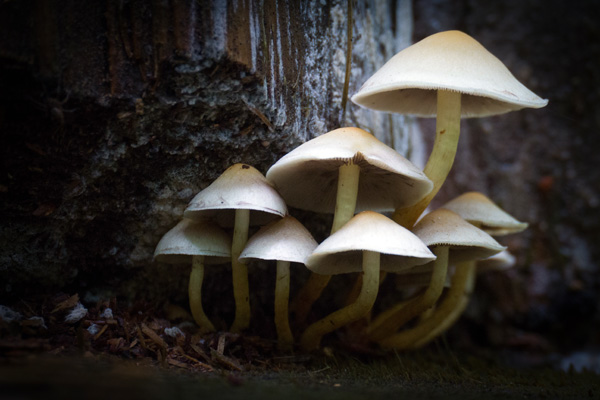 Fungi are an important group that includes mushrooms, yeasts, and molds. However, soil fungi are extremely important in the soil. They include decomposers, mutualistic and pathogenic types of fungi.

Mushrooms are not just the things you buy in the store for salads. They are actually the "fruiting bodies" of microscopic fungi in the soil as well as pathogenic and beneficial fungi growing on and inside living and dead trees, and those growing in other material. The mushrooms release spores so the fungi can spread and continue.

Decomposers: Fungi decomposers pick up where bacteria left off. These fungi will decompose the difficult to breakdown residues left behind by bacteria, such as cellulose and lignin.

Mutualistic Fungi: An example is Mycorrhizae Fungi. This is a beneficial fungi that form a symbiotic relationship with certain plants. Mycorrhizae grow on the roots and form chains that extend far into the soil. They capture nutrients and bring them to the roots in exchange for taking a small amount of plant sugars as food. 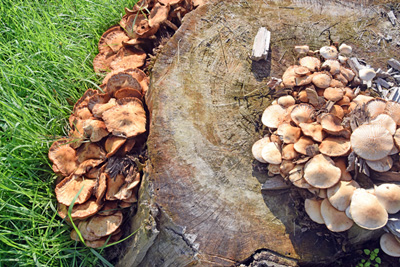 Conks are the Evidence of Internal Decaying Fungi in Trees

Pathogenic Fungi: Some fungi can be pathogenic as well as beneficial depending on the situation. The decaying fungi in dead and fallen trees is beneficial. In living trees, it is considered pathogenic.

The conks or mushrooms growing on trees are an indication that a decaying pathogen is at work inside the tree. These types of microorganisms can be spread by wind, insects, birds and animals and can gain access inside trees through broken branches, wounds to trees, root grafts, boring insects, etc. Learning when to prune trees and when not to prune can save trees from threats, such as Oak Wilt and others. Prune oaks when oak borers, which are attracted to moisture in cut limbs, are not present.

Mycellium is a Web-like Material Produced by a Fungal Infection

In turf, pathogenic fungi is one of the greatest disease threats. From Brown patch disease to pythium and root rots to dollar spot, fungi diseases pose continuous threats. For a disease to spread, it must have a susceptible plant, correct temperature, moisture and humidity. Other factors also need to be in place. However, healthy soil and plants make it harder for diseases to take hold. High numbers of beneificial microbes in soil can keep pathogenic microbes at bay. (Hint: Turf Formula and Super-Cal together increased beneficial microbes by 3400% in 24 hours and decreased brown patch pathogens by 35%. University of Missouri/Columbia - See our product pages.)

Mycellium is the evidence of spreading diseases on grass. It is a web-like material that the fungi produces. It usually occurs on the outside edge of diseased patches and is most often seen on early morning, damp grass.

Follow good maintenance practices. No watering at night. Do not fertilize diseased grass (exceptions include Dollar Spot and Rust Diseases). Do not apply some types of herbicides when diseases are present. 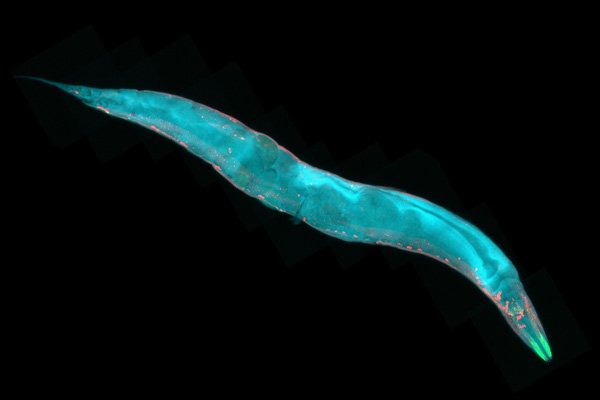 Nematodes both beneficial and harmful are Less than 1mm in Length

Nematodes: Nematodes are tiny worm-like organisms less than 1 mm in length. In the UK they are called eelworms. There are some 40,000 different known types of nematodes of which about half are parasitic. None are harmful to humans. There is almost no place on earth where nematodes do not exist from deep oceans to snow topped mountians.

Most are beneficial and perform a wide range of tasks. Some types feed upon bacteria and fungi and can keep pathogenic microbes under control. Others feed upon and help control damaging insects, such as grubs, fleas, ticks and other soil dwelling insects. Still others are involved in nutrient recycling and breakdown dead insect bodies and plant life into elements plants need to survive. Some nematodes have been commercially harvested and grown as a type of insecticide for grubs, etc.

Pathogenic Nematodes: Some feed upon plant roots and can cause decline in trees and plants. Others are taken into the zylem of specific host trees and multiply rapidly into the billions. Once they reach a threshold they can kill susceptible trees, plants and crops. It is estimated that 15% of crop failure is a result of pathogenic nematodes.

Types of Microorganisms back to Lawn Care Academy Home