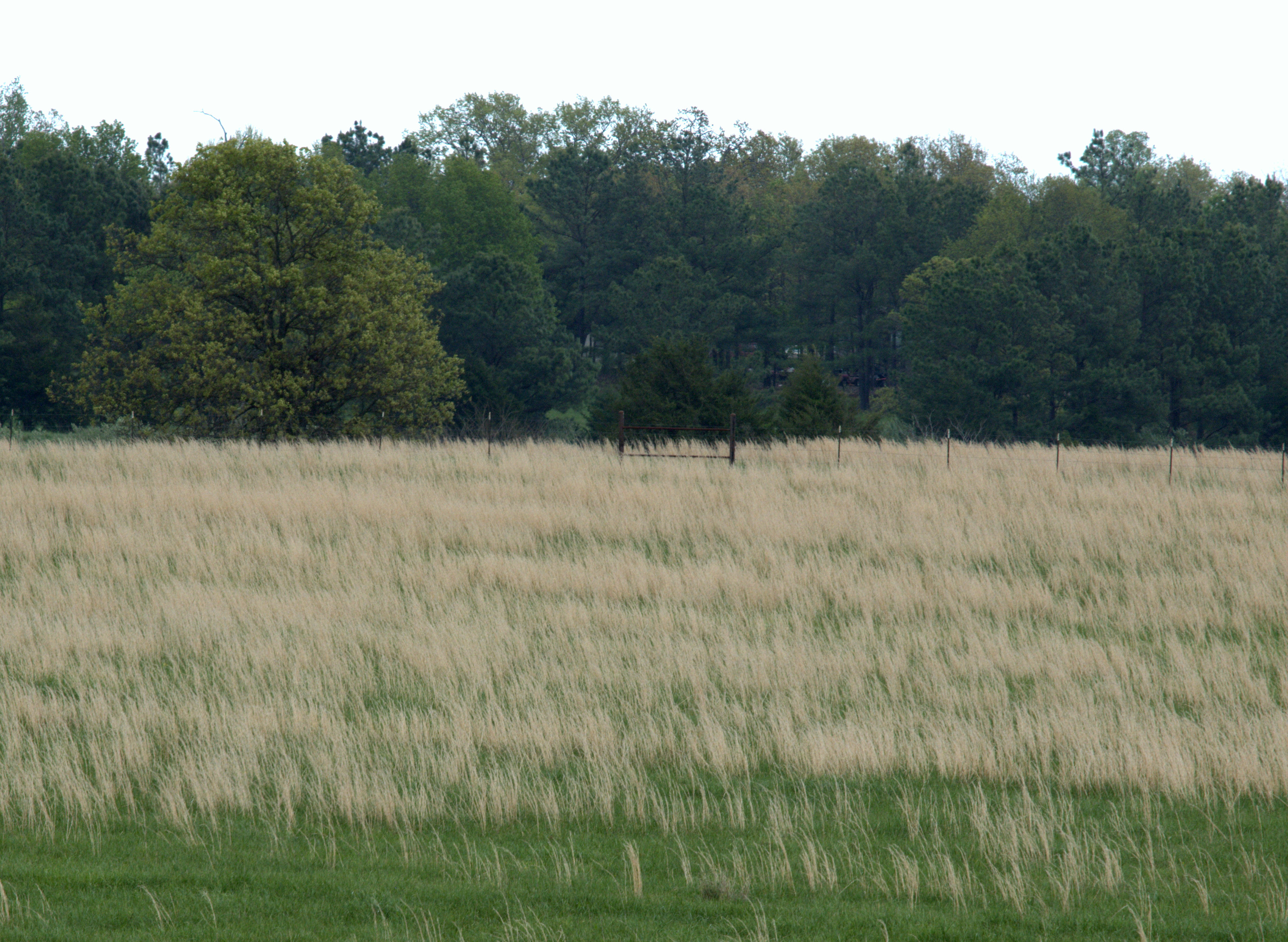 Broomsedge Bluestem grass is no stranger to the fields in the south and Mid-West. Often referred to simply as "Sage Grass" or "Sage", it is a native grass to the U.S.

It is also referred to as a type of signal or indicator grass. The definition of a signal grass means its presence indicates that much greater problems exist in the soil.  In this case, it is an indicator of poorly maintained, low nutrient fields.

Its natural range is in the far south from Texas to Florida and upwards to at least Maryland. It has been hard to pinpoint the exact range of sage grass, but I know from my customers and website visitors that it exists from Virginia and down. Due to landscape uses and planted grass that escaped cultivation, it can now be found from California to the east coast.

Although it is an undesirable grass in pastures, it does have some uses elsewhere. It is grown and used as a landscape plant and sold in commercial nurseries. The tan color often is used to offset the green vegetation of landscape plants. When used in flower gardens and sitting gardens that get plenty of sunlight, people say they love the color the grass provides. If you want to see sage grass in its natural environment, the winter months are the best times. In cool season grass pastures, as in the photo, the sage stands a few feet above the pasture grass.

Sage grass can also be used for erosion control in difficult sites. It is drought resistant and has a well-developed root system that helps keep soil in place on hillsides and seasonal creek banks. It requires no maintenance once it is established.

Sage is Largely Ignored by Cattle

However, in pastures it is generally ignored by cattle except in the first year's growth.  The first year is basically the only growth stage of sage grass that cattle will graze on it since the grass is more tender and palatable at this stage. It is generally not their first choice and will often only graze it when better grass is in short supply. The problem is that sage grass is low in nutrients. As the grass matures, it becomes unpalatable so cattle avoid it.

As mentioned, sage grass prefers over-grazed and poorly maintained fields. This is generally low pH and low phosphorus conditions. The phosphorus problem can be either from low phosphorus levels in the soil or because the low pH has bound up the P in the soil, making it unavailable to plants. Due to the variations that can affect P availability, it is recommended that a soil test be performed to determine what is actually lacking.

It has been often reported that adding lime didn't actually hinder the growth of sage. I have heard this from many people who walked me through their efforts to get rid of sage grass.

One key solution is to fix all nutrient problems thus rebuilding the soil to the specifications of your grass type, followed by rotational grazing. In this way it makes the soil less suitable for sage grass and more preferable to your grass type. It can take many years to finally rid your pastures of sage. In a case that was followed in Missouri, it took 5 years to see the preferred grass finally winning the battle.

Sage grass has virtually no pests or disease problems. Burning it or mowing is not an effective treatment.

One way is to spray it with vegetation killer, such as Round-Up. However, this is not advisable because it kills everything, both good grass and bad. You can use the rope method on well-grazed pastures when the sage is actively growing. However, if this is all you do, the conditions that allowed for the sage grass to appear is still there.

However, we have been hearing for many years about how Agri-Gro Calcium was reducing sage grass. So a couple years ago (around 2018) we started asking our customers about what effect it has had on their Sage Grass. Virtually every single person who had sage grass reported a reduction after the first year.

In the spring of 2020, I received a call from a person in Charloettesville, Virginia who said he talked to a rancher who had a 50% reduction of sage after using Agri-Gro Liquid Calcium. In fact, this is the reason why he said he purchased the calcium from me. I also spoke to the owners of Agri-Gro who confirmed the reports of their calcium and sage grass reduction.

Many of our customers knew about our calcium for years, but being cautious they waited to purchase some only after talking to someone who used it and found out it was working well on their fields. The reduction of sage grass by Agri-Gro's Calcium has been a major selling factor for us.

One person in South Carolina purchased several drums, but only sprayed half his pasture because he didn't know if it would work. He called me and told me that a few weeks later he noticed every one of his cattle were grazing only on the side he sprayed. Many others have told me the same thing.

If you have any questions don't hesitate to contact me.

Agri-Gro's liquid calcium supplies immediately available calcium that plants can use from the first day. What is not used binds with the soil's CEC sites.  It also has a proprietary blend of organic acids that breakdown the soil's unavailable calcium for plants to use. It was studied by the University of Illinois Extension and found that one gallon produced the equivalent of 500 lbs of lime due to the organic acids. This test was also conducted in Mississippi with the same results.

So once it is applied, your grass will receive immediately available calcium and then for the next 90 plus days will continue to receive calcium through the work of the organic acids.

Remember that people often put lime on their fields when what the plants really needed was immediately available calcium. Soil Calcium saturation should be 65 - 80 percent and without proper calcium plants will decline. What takes over are Broomsedge, Yellow Rocket, Golden Rod (poisonous to cattle) and other plants.

For further research you can take a look at this page: USDA Guide to Broomsedge