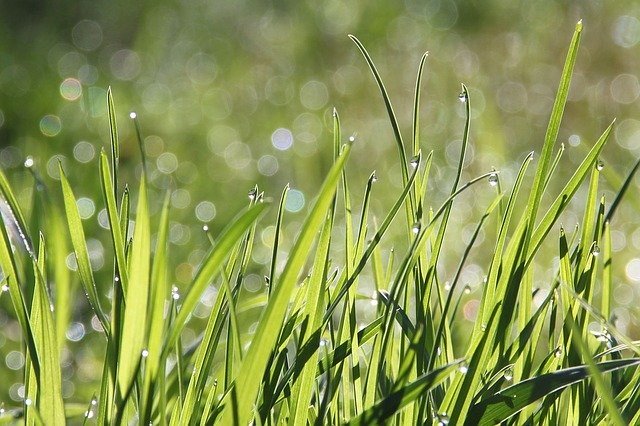 Kentucky Bluegrass with Its Boat-Shaped Tips

There are a number of standard and improved grass cultivars available to the public. Some of the older, more common varieties can also the most problematic when trying to develop a beautiful lawn. You need to be aware of how to care for them, which will be explained in more detail.

A cultivar is a variety of a specific plant that is created and maintained through cultivation. Turfgrass researchers take a specific grass and breed certain improvements into them. Some cultivars were created to develop a deeper color, more improved disease resistance, or a number of other improvements.

Grass seed can be confusing to some people. A lot of seed is marketed under "categories", such as Shade Grass or Spot Fixer or Full Sun Grass. However, some lawn seed is not compatible with other grasses.

For example, Kentucky 31 Tall Fescue is not compatible with Turf Type Tall Fescue. They are of the same breed, but one is a pasture grass and the other is a refined turfgrass. Make sure the grass that is growing in your lawn is compatible with the seed you are planning to spread. This page is to help you with identifying different grass types and various cultivars.

Cultivars - improved varieties of grass that are maintained by cultivation. "Cultivar" and "variety" are often used interchangeably.

Quality - refers to overall appearance and could include some or all of the following such as density, texture, color, resistance to insects and disease.

Color - rated for its color up to very dark green.

Density - how thick the turf will become.

Seeded Variety - indicates that this grass species is started by seed.

Texture - indicates how thick or narrow the blade is.

Vegetative Variety - Grass that is started by plugs, squares, or sod.

Disease Resistant - Improved varieties that are bred for greater resistance to a disease or diseases common to that species.

Also, not all cultivars work equally well in all areas of adaption. Certain grasses, such as St. Augustine Grass has a more narrow range of adaptation. It is best grown in the southern states and Southern California. Check with your county extension office for the varieties that are best where you live.

For more information on determining your climate zone, go to Climate Zones in the U.S..

Bluegrass is an extremely popular grass. It is compatible with Turf Type Tall Fescue, Common Bermudagrass or can stand on its own, even in the  northern, cold winter states.

There are two basic types of bluegrass. They are the "Common"  and “Improved" varieties.

Common bluegrass, such as Kentucky Bluegrass, cannot take intense fertilization or it may become disease prone. If you have K. bluegrass mixed with other grasses and your grass gets a disease, if you look carefully you may find it began in the bluegrass first. If you will be applying regular fertilizer treatments, use the improved varieties of bluegrass. The improved varieties were developed for use on intensely fertilized sites.

For use on sites with little or no nitrogen fertilizer and little to no irrigation:

For use on sites where a moderate to intense fertility program is in place:

Until just after the 21 century, tall fescue was a field grass. It still is and is a popular grass for cattle operations.

Now, with the development of Turf Type Tall Fescue, scientists have brought to market a dark green, fine bladed, low growing turf grass that looks amazing on lawns and as a sports turf. All have excellent shade tolerances.

They now have some rhizomatous turf type tall fescue that can spread via underground stems, something that didn't exist just a few years ago.

There are so many new, experimental and advanced varieties coming out it is impossible to list them all. Most all are bred for a dark green color, low growth habit and for drought and disease resistance.

Kentucky 31 Tall Fescue is often sold in retail stores. Some bags will say “For Field and Turf Use” while smaller bags may just say it is for lawns. It is actually a field grass.

However, if planted as a stand alone grass, K 31 Tall Fescue can make a great lawn and can take low cutting down down to 3" tall. It won't have the fine blades or dark green color of Turf Type Tall Fescue, but it is very disease resistant. Just don't let it grow uncut or you will have 4 ft tall blades and stalks in your lawn.

You should look for lawn seed that have several varieties of turf type tall fescue mixed together for the best quality turf. Blending Turf Type Tall Fescue and K. Bluegrass is also common and the grasses blend well. Be aware, however, bluegrass is sometimes blended with other seeds because it is a fairly inexpensive seed. If the site will be maintained under intense fertilization or considerable shade, check the variety of bluegrass to ensure it is an improved type.

These grasses originated in Europe and have blades that are among the finest of all grasses. Fine Fescues are known for their extreme shade tolerance. The U.S. is much hotter than Scottland where some of these grasses were developed. In the U.S. Fine Fescues are marketed almost exclusively as "Shade Grass".

However, they cannot tolerate high heat, direct sunlight (some varieties) or extreme drought conditions found in parts of the U.S. Creeping Red does better in cooler, wetter regions. If planted in full sun, it will usually die. They usually do not survive well outside of heavily shaded spots.

Ryegrass is often used in the southern states to overseed winter Bermuda. It also makes a quality turfgrass is cooler areas of the U.S. and in parts of the transition zone. Ryegrass is best when mixed with at least three different varieties.

Perennial Ryegrass is the only cool season grass that is overseeded on Bermudagrass greens. Some varieties of P. ryegrass has the ability to survive well when mowed at extremely low heights, down to 1/2" tall. In the spring when the dominate Bermudagrass is waking up, then the grass is cut down to 1/4" and kills off the P. ryegrass.

Unfortunately, annual ryegrass is sometimes marketed as a permanent turf type grass. Don’t be fooled by this marketing. Annual rye has a life cycle of only one year. It can't survive the heat of summer. If the bag is a lawn seed mixture where annual ryegrass is just one of several grass types, then that may be okay. It germinates in as little as 3 days and becomes a cover grass till the other seeds germinates or reaches mowing height.